Génere has seen double digit sales growth almost every year since its founding in 2003. In order to keep up with such rapid growth, Génere has moved or expanded its warehouse location seven times over those years. Once again stuck in a “tight” space and wanting to take purchasing to the next level, HIMPACT was selected as the tool to increase inventory efficiency, customer service and sales.

José Génere is not only the founder but, as is typical for many founders/owners, he still directly manages the buying department. He was growing concerned that he would have to hand off this function to a new manager as the other responsibilities of his position were building. For José, one of the first benefits of HIMPACT is that he can continue to keep a finger on the pulse of his inventory by continuing to buy a few vendor lines himself. Additionally, buying time has significantly reduced because of HIMPACT allowing time to prepare for promotions and deals. The second benefit is that Génere can now buy directly from manufacturers, instead of via other wholesalers. Because of HIMPACT’s 16% inventory reduction, the company freed up much needed warehouse space so that it could accommodate the minimum order quantities of the manufacturers, thus allowing Génere Foods to be more price competitive. In the same time that inventories fell by 16%, customer service increased by over 6%, an effective 49% inventory reduction! “Now with an even stronger competitive advantage on price and customer service, we expect another great year of growth,” says José Génere.

“A big impression I had after installing HIMPACT wasn’t so much the orders it was building for me, but rather the orders it wasn’t building. For one supplier in particular, I had the practice of buying a truck-load every 10 days. HIMPACT showed me, with poignant clarity, that I could actually wait a month before I would need to order again,”      Jose Génere, President and Owner

Get the full PDF of this success story. 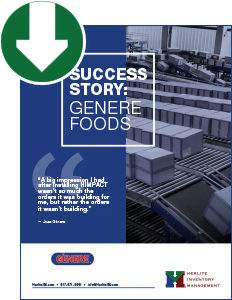