How can you sustain profitable inventory levels when different departments have conflicting priorities?

This white paper will show you how to optimize your business for:

The Unfortunate History of Prevailing Winds

When Anders Herlitz lead E3 and gave lectures at the Inventory Management Institute, his favorite part of the Executive School was when he described the business phenomenon referred to as “prevailing winds.”

After explaining it, he would ask all the CEOs and CFOs in the room to raise their hands, and to keep them raised, if they engaged in this practice at least once a year. All the hands in the room would stay raised. When asked, “…at least twice,” about a quarter of the hands would drop. “At least three times,” and another quarter would drop.

In all the years he lectured, he only found one company that did this more than once per quarter. Two to four times seemed to be most typical.

What are Prevailing Winds?

Here is how Anders would describe the phenomenon. It typically starts when the CFO feels the need to increase turns. Perhaps there is a credit line review with the bank coming up or another outside circumstance, but most typically this is just the result of the inventory finding a level that the CFO views as undesirable. The CFO issues the edict to “Hold back buying.”

As with any department made up of professionals with diverse business experience, this is interpreted differently from buyer to buyer. What’s worse, each buyer will execute on this change in the management’s “Prevailing Wind” differently during the day due to time constraints, mood, and energy level. The perceived result is the inventory reduction that the CFO needed, so he then moves on to “bother another department,” as Anders would say. 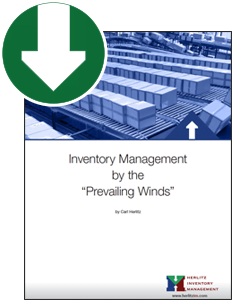 Read more about how to manage Inventory in Prevailing Winds!